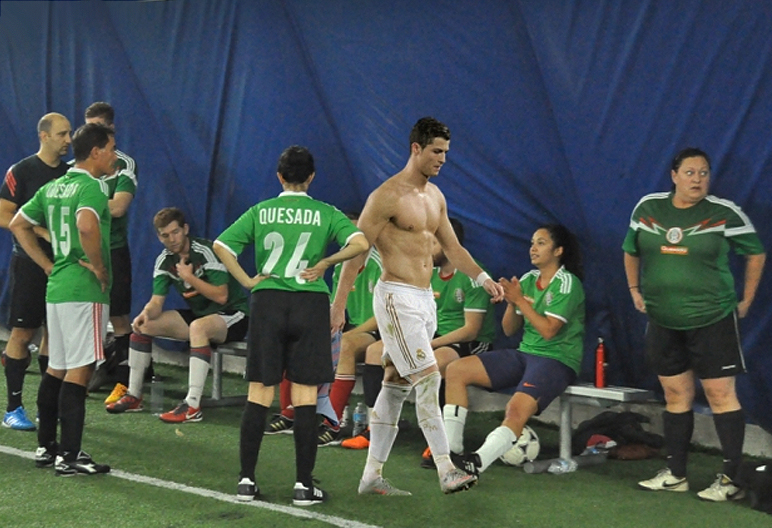 We’ve all seen them before. The guys who aren’t quite on top of things when it’s midway through the season. That new guy or girl in a sea a familiar faces.


The annoying enigma who appears a couple weeks shy of the season’s end to lift a team sitting dead last into a playoff spot. Meanwhile you and your team have been there all season busting your behinds. We know you don’t like em’ and neither do we. This week Soccerworld has compiled our ultimate list; the top five ways to spot a ringer.

This person asks where the dome entrance is and where field 1 or 2 is when it’s close to the end of the season. Every session come playoff time there seems to be one or two individuals who don’t quite have their bearings around our Soccerworld facility. If a player isn’t really sure where he’s supposed to be yet by the second half of the season, then rest assured they are a ringer!

4. Did they just ask what their own team name is?

We take pride in the creativity of the team names from the oddly foreign Kuntslermannschaft to the slightly vulgar Suck My Balotellis, our leagues have some pretty creative names. It’s an obvious sign when a player comes through the office and asks what the name of their own team is. When this happens, rest assured they are a ringer.

3. They are mad at the ref for calling them on a slide tackle.

We don’t fault players who don’t read the rules of the leagues. We know you all have day jobs and more important things to do then read the code of conduct for your rec league. Without failure, every year there’s that person who storms into the office after an intense playoff game to complain about the “clean” slide tackle they made, and how the referee deemed it a foul. When this happens, then rest assured they are a ringer.

2. Their name is scribbled ineligibly onto the game sheet, and of course they score.

Of course, the player whose name is scribbled in incredibly ineligibly (try saying that 10 times quickly) scores 5 goals. Why wouldn’t they? Somehow the team’s best player has accumulated 20 goals in the last 4 games of the season and was nowhere to be seen for the 2 months before that…rest assured they are a ringer.

1. They don’t have a proper jersey.

This player not only doesn’t have the same jersey as his teammates, but they ask for a pinnie because they aren’t even wearing the right colour. Also known as strike number 2. This player was not informed to bring a similar colour of the team jersey…rest assured they are a ringer!